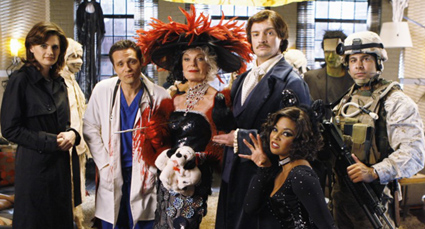 It's late at night, and Castle is at home, putting on his Mal Reynolds costume. He's considering wearing it to a party he'll be hosting on Halloween, but Alexis points out that he already wore it five years ago. He then asks about an egg she's supposed to take care of for school, and she informs him that she and her friend Paige had decided to name it Feggin. Just then, Beckett calls. After changing back into his normal clothes, Castle meets the gang at a cemetery, where a young man was stabbed in the heart with a wooden stake. If that wasn't weird enough, he had vampire fangs, which Lanie identifies as high-end veneers. At the M.E.'s office later, Lanie informs Castle and Beckett that the victim had bite marks on his thigh, as well as synthetic black hairs on his body, as from a wig. However, they still don't have an I.D. on the victim, so the next day, Castle takes Beckett to a guy he knows, Barry Frank a.k.a. the Fang Master. Barry, as it turns out, did the victim's veneers two months ago, and says he knew the victim only as Crow. He gives them Crow's billing address, and so they go to search his place for clues, learning from his landlord that Crow's real name was Matthew Freeman. They also learn that shortly before his death, he'd gotten into an argument with a girl with long black hair, vampire fangs, and, according to the landlord, her own website. Back at the precinct, the detectives pull up the website, which is for a vampire coven, led by the dark-haired Mistress Vixen. They eventually learn the location of the coven's next gathering, and Beckett and Castle crash it that night, finding Mistress Vixen in the back room of a vampire nightclub, 'feeding' on a woman.

Taking Vixen aside, they learn that Matthew was one of her lovers, but that she was at the club at the time of his murder. She says she fought with Matthew because he'd been seeing someone else, a guy named Daemon who'd convinced him to write a graphic novel about a vampire in New York City. Only, Matthew and Daemon had based it on a homeless guy named Morgan Lockerby, who, according to Vixen, had lost his grip on reality and had begun to think he was a real vampire. Later, at the precinct, Beckett begins to wonder what could've drawn Matthew to the vampire lifestyle. She asks Castle what drove him to become a mystery writer, but before he can answer, they're interrupted by Ryan and Esposito, who managed to track down a phone number for Matthew's family in Connecticut. A few hours later, she has Matthew's parents and younger sister in the precinct. The Freemans claim that they hadn't seen Matthew, or Crow as he preferred, in months, but that he'd left a message a couple of days ago, sounding upset. Later, Esposito informs Beckett that he hasn't been able to track down Daemon yet, nor Morgan Lockerby, who escaped from a mental institution years ago and has been off the grid ever since. However, Castle has been going over Matthew and Daemon's comic book, and recognizes a street corner on one of the pages, realizing it's essentially a road map to Morgan. Sure enough, they find Morgan's lair in an abandoned building, complete with a vampiric coffin and burning candles. As Ryan and Esposito look on, Castle and Beckett check the coffin, only to find it empty. Instead, Morgan jumps out at Castle from behind, biting him. When Castle gets Morgan into some sunlight, Morgan's skin actually burns, freaking out Esposito, who starts to believe Morgan really is a vampire.

Back at the precinct, however, Lanie informs the gang that Morgan has porphyria, which causes extreme photosensitivity as well as hallucinations and paranoia. She assures Castle that the condition is genetic and therefore not contagious, before heading back to the morgue to continue examining Matthew's body. Beckett tries to ask Morgan about Matthew, but he starts rambling about spots and blood everywhere, seeming to indicate that he was in the cemetery with Matthew when he died. Beckett then gets a call from the crime lab, informing her that some smudges found on the stake that killed Matthew were India ink. According to Castle, India ink is used by comic book writers, which would seem to point to Daemon as a suspect. That night, Castle is carving pumpkins with Alexis, when she asks about a senior party she and Paige were invited to. Castle reluctantly agrees to let her go, promising that she can call him from the party no matter what and she won't get into any trouble. He also promises to egg-sit Feggin while she and Paige are at the party. At the precinct the next day, Beckett talks with a state psychologist, Dr. Holloway, about Morgan Lockerby. She shows him some of Matthew's drawings, asking what he makes of them. Dr. Holloway says Matthew likely suffered trauma as a child, and that Beckett should turn her focus to a woman who appears consistently in the drawings. Just then, Castle arrives, his egg 'grandchild' in tow. As he's explaining the situation with Feggin and Alexis's first senior party, Beckett receives a call from Esposito, who finally managed to track down Daemon. Turns out, though, Daemon is dead, having been shot in his apartment. On top of that, Daemon appears to be a werewolf.

Beckett and Castle arrive on the scene, to find Lanie already kneeling over the body. She informs them that the werewolf hairs on Daemon — a.k.a. Jonas Westfall, a grad student from NYU studying Forensic Anthropology — are sythetic, glued on with spirit gum. Based on a witness statement and the lividity of Daemon's body, they conclude that he was killed the same day as Matthew, and that Morgan couldn't have done it because Daemon was killed first, during the day. They find a box of wooden stakes, similar to the one that killed Matthew, and a spilled bottle of India ink, which would explain the smudges. They also find, thanks to Lanie, an envelope taped to the underside of a table. At the precinct that night, Castle and Beckett are going through the envelope's contents, when they find a picture of a woman, the same woman from Matthew's drawings. The woman's body was found two years ago, but the drawings were dated four years ago, meaning the woman had to have had a personal connection to Matthew. Just then, Castle receives a call from Alexis, who's at the senior party, freaking out. She explains that Paige had too much spiked punch, and so she's now worried about her. Castle hurries out the door, on his way. Later, he brings the girls back to his place, carrying Paige to the couch and setting her down while Martha gets her a glass of water. Castle keeps his word that Alexis isn't in any trouble, but insists on calling Paige's parents to notify them of their daughter's condition.

At the precinct the next day, Beckett shows the woman's picture to the Freemans, who say they were familiar with her only through Matthew's artwork. She then asks if Matthew experienced anything traumatic as a child, and they claim he didn't. Later, Esposito informs Beckett that Daemon was also looking into the mystery woman's murder, and that she had been killed 18 years ago, by the same gun used to kill Daemon. Unfortunately, authorities still can't seem to I.D. her. Just then, Ryan arrives, having collected Matthew's portfolio from an art school he attended. One of the sketches in it is of a forked tree, the same tree where the mystery woman's body was found, and they realize that Matthew must've witnessed the woman's murder when he was two years old. Beckett then finds Castle waiting for her at her desk, and he thanks her for taking care of Feggin while he went to take care of Alexis and Paige. Then, after running a quick background check on the Freemans, Ryan and Esposito share with Castle and Beckett what they've learned: Freeman is actually the wife, Janice's, maiden name, and that when Matthew's dad Alan married her, he and Matthew both took her last name. They also reveal that Alan's first wife, Elizabeth McGinty, went missing 18 years ago, meaning the mystery woman was Matthew's real mom and the Freemans lied about it. Further, upon learning Elizabeth's maiden name, Dryden, Castle figures out another piece of the puzzle. He takes Beckett and Esposito to the cemetery where Matthew's body was found; near the crime scene was a headstone with the name 'Elizabeth Dryden' and a qustion mark in place of a death date. They realize Matthew's family had been lying to him his whole life, and figure Matthew had confronted his dad about it in the cemetery.

Back at the precinct, Beckett and Castle confront Alan Freeman over the fact that he lied to his son, accusing him of killing his wife and then killing Matthew once he found out. Alan insists that he lied to protect his son, and that he had nothing to do with either murder. A bit later, Janice approaches Beckett and Castle, anxious to know what's going on. Castle notices leopard spots on Janice's coat, and remembers Morgan Lockerby's ramblings. He tricks Janice into walking past where Morgan is being held, and Morgan starts going crazy, identifying Janice as the "heartless bitch" who'd killed Matthew. After Janice is arrested, Beckett sits Alan down, explaining that Janice had killed Elizabeth so she could have Alan to herself and then killed Daemon and Matthew once they'd started doing some digging. As Alan and his daughter Rosie head home, Beckett points out that Castle never did tell her what made him become a writer. So, he tells Beckett that when he was a kid, he found the body of his housekeeper's son on a beach in the Hamptons, but then, starts smirking, revealing the whole story to be made up. Castle then leaves to get ready for his Halloween party, as Beckett vows to get revenge. That night, Castle, in costume as Edgar Allan Poe, notices Alexis isn't ready for the party, and asks her what's wrong. She informs him that Paige was so upset with her that she sabotaged their project by 'killing' Feggin, though she claimed it was an accident. Castle does some parental reassuring, and Alexis starts to feel better. Later, Castle's party is in full swing. Beckett arrives last, seemingly wearing nothing but a black trenchcoat and heels. She says she decided to go sexy with her costume, but then, when she opens up the coat, a toy frog attached to her shirt pops out, scaring Castle. Thus, Beckett gets her revenge.